Our Mission
Join us
Support our Mission 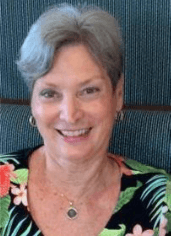 The soft smile, twinkling eyes, and calm demeanor that defined Susan Bergert belied the deep passion for good works that smoldered within. A strong will often ignited that core person and positive outcomes for worthy causes always followed.

Although a seventh-generation member of a pioneer New Smyrna Beach family, Susan Galbreath Bergert lived most of her adult life in Virginia with her husband, Byron, and their son and daughter. She applied the degree that she earned in English and Journalism at the University of Florida to both teaching and service at the U.S. Department of Education. In the midst of the demands of career and motherhood she never failed to dedicate time to support non-profit organizations and to be an advocate for those who had no public voice.

When her husband of 46 years died, the city of her youth was a siren’s call to return to the hometown she adored. Her return and the beginning of the NSB Residents’ Coalition coincided.

Concerned that the special character of her ancestral home could be lost with misdirected growth, Susan became an active member of the Coalition spending time to petition and later to assist in developing the Coalition’s brochure, website, by-laws and organizational structure. In addition, she made time to volunteer at the Museum, to play a leadership role in the Southeast Volusia Historical Society, and to serve on the city’s Historical Commission when tapped by the City Commission to fill a vacancy.

At the time of her unexpected death Susan was working to make this year’s 250th Anniversary the best possible celebration. As was typical with her, she also made time to assist in the early planning of the Coalition’s Charming Home Tour.

It is fitting, therefore, that the Charming Home Tour hereby be dedicated to Susan Galbreath Bergert. As she planned, the Tour will take place on March 22nd, the same day as the official start of the City’s 250th anniversary celebration. Her sweet spirit and fierce loyalty to her city will accompany all who walk the streets of New Smyrna Beach on this special day of commemoration.