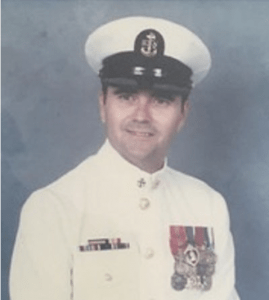 The life of Joseph (Joe) Montpelier was taken on March 7th in a motorcycle accident on Dunlawton Avenue in Port Orange, Florida. One of Joe’s greatest pleasures was riding his Harley Street Glide CVO as he was doing at the time of his accident. Joe was 77. He was born in Ogdensbury, NY, but spent his growing up years in New Smyrna Beach, Florida, his residence at the time of his death.
On August 24, 1967, Joe joined the United States Navy and became a Corpsman. He was deployed to Vietnam where he frequently came under heavy fire. He was awarded two Purple Hearts and two Bronze Stars. He retired from the military after 20 years of service and returned to his home in New Smyrna Beach.
Joe was an active and beloved member of the New Smyrna Beach Harley Owners Group. Joe took many trips both near and far, even crisscrossing the US a couple of times. In addition to motorcycle trips Joe enjoyed stamp collecting, watching and photographing birds, viewing Great Lecture series videos and listening to classical music. He was a member of the SE Volusia Audubon Society, the West Volusia DeLand Stamp Club and for many years and was an active member of the NSB Residents’ Coalition Leadership Group. His pet cat, Lucy, was a source of constant joy.
Preceding Joe in death were his parents, Wilfred and Kathleen Montpelier and his sister, Kathy Montpelier. Gifts in Joe’s memory can be sent to the Southeast Volusia Audubon society at P.O. Box 46, New Smyrna Beach, FL 32170. A memorial service for Joe will be held soon in the chapel of the Settle-Wilder funeral home. Condolences may be made online at www.settlewilderfuneralhome.com.